The Frisells and their KAYs – a family affair 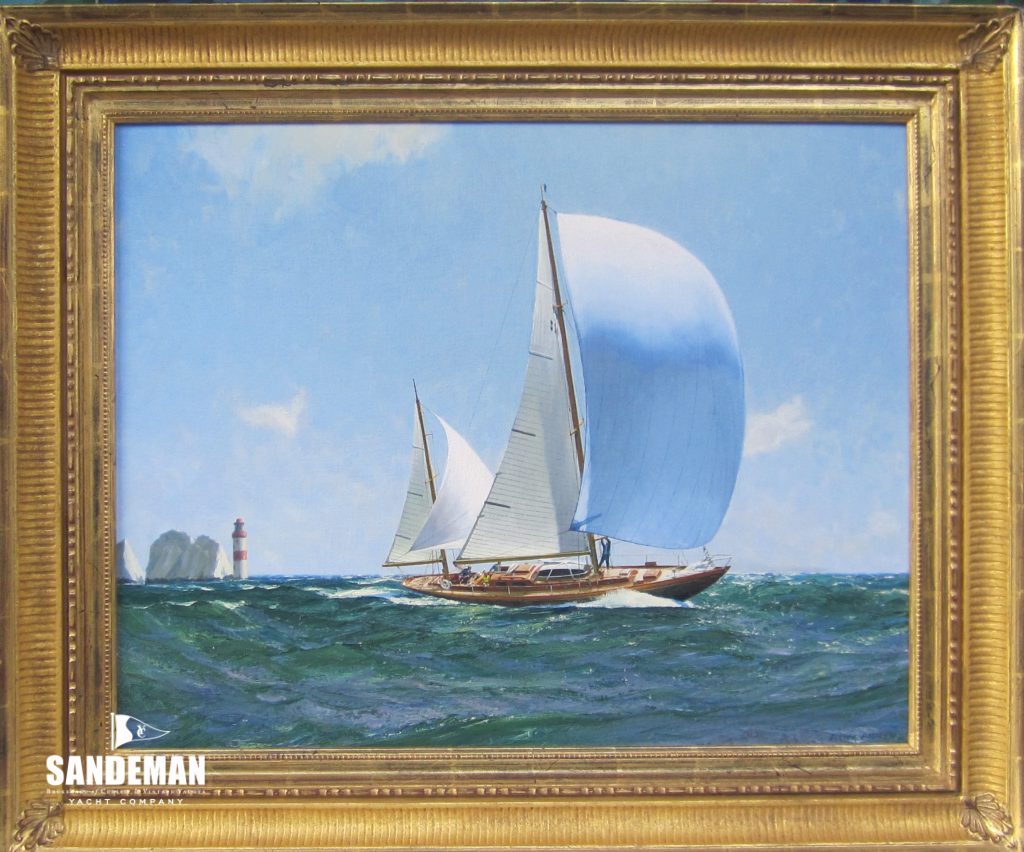 The story of father and son Sven and Arne Frisell and their series of Sparkman & Stephens-designed offshore racer/ cruisers, all named KAY, is the stuff of LEGEND – appropriately, the present name of the 1954 KAY, built at Lemwerder, Bremen, Germany, by Abeking & Rasmussen – and for sale with Sandeman Yacht Company.

Petra Frisell, granddaughter of original owner, Sven, has contributed this delightful family insight to the KAY story along with the reproduction above of the 1958 oil painting Kay off the Needles by the late Deryck Foster, reproduced here courtesy of Montgomery Gallery, San Francisco. We’ll let Petra continue…

“I can confirm that this Sparkman & Stephens design, built by Abeking and Rasmussen, was commissioned and owned by my grandfather Sven Frisell, Swedish-born and director of Swedish Iron Ore, Ltd. She was named KAY (as were all his yachts) after my grandmother Katherine, known affectionately as KAY. My grandfather was rather obsessed with sailing and racing, and by naming each vessel KAY, I think he hoped my grandmother would be more tolerant of his hobby. My grandparents were based in London, but their summer home, “Backudden”, was part of the Gothenburg archipelago of which Marstrand is today known as a centre of yachting. In those days, it was mostly commercial fishing boats, so each time my grandfather commissioned a new racing yacht, and docked her along the harbour wall in Marstrand, he created quite a stir!

“My father, Arne Frisell, was perhaps even more passionate about sailing than my grandfather, and from the time he was 17, he crewed for my grandfather whenever his schooling allowed it, and then well after that. Unfortunately, my grandfather passed in 1964, and my father in 2004, so I cannot ask them about this painting, or all the passages made with this KAY; Rod and Olin Stephens, close family friends, are also gone, as are so many of the racing buddies who participated.

“I believe that this particular KAY was the one my grandfather kept the longest, and as he raced Cowes, Fastnet, Trans-Atlantic and Bermuda, it is not unlikely that she participated in all of them. I believe she was sold sometime between 1959 and 1961.

“We all saw this KAY again in St. Barth’s sometime in the late 70s/ early 80s – she was then painted white and owned by a very nice American, since deceased, who lived on board and raced her frequently; she looked grand and was clearly loved. He had renamed her LEGEND, as my grand-father and father never allowed the name KAY to go with the yacht at the time of sale – the rule of sale was always that the new owner would use another name. The only exception to this rule was the very last KAY, another S&S yacht, which my father sold around 1993.

“Deryck Foster painted many KAYs. When I grew up, we seemed to have walls full of them in our summer house. (The current owner of “Backudden” still has some of these in the guest house). The one in question here was sold to Quester Gallery in Stonington by my parents in the 1980’s.

“My father would often take Kay out for a sail, racing or not, so it would not be unrealistic to assume the painting was sketched from an actual scene with a small crew (though all that sail looks a bit of a brag). My grandfather loved racing and the camaraderie with crew. My father just loved being at sea, and in fact spent at least ten years sailing across oceans all on his own. Typically, in the ’50s and early ’60s, the family’s boating assistant – a Swede named Stig who came from Marstrand – would be with them on most sails — so he might very well be the one depicted in the bow here, or maybe it is Rod Stephens himself! I can’t tell from the picture of the painting – nor do I remember this particular painting very well – but if the helmsman is wearing a navy cap it would be either my grand-father or father. They both always wore salty old captain’s caps; I attach a pic of my father in his, and on board this Kay. (The patch on the cap says GKSS – Gothenburg’s Royal Sailing Association).”

Deryck Foster’s painting is dated 1958, suggesting that he may have used more than little of that licence artists are allowed to depict KAY four sail reaching to a southeasterly after the start of the extremely stormy 1957 Fastnet Race, which actually started into the teeth of storm force southwesterly winds that barely abated for the duration of the 600-mile offshore classic. At the very least it allows us to say that KAY, now LEGEND, wasn’t just one of only 12 boats to finish from 41 starters – she also came second on both elapsed and corrected time to Richard Nye’s famous Philip Rhodes-designed yawl CARINA II.

CARINA II, destroyed through neglect by 2004, didn’t have the same luck in life as KAY/ LEGEND. LEGEND has continued to be loved, presently graces the perfect sailing waters of San Francisco Bay and is looking for another caretaker to give her just deserts.

Full particulars for LEGEND ex KAY are at our website.