The yachtsman’s bookshelf is a wonderful realm. Before the wide availability of electronics it was a resource for practical knowledge but it’s also a place of inspiration. Books as important as the Shipmaster’s Medical Guide and The Admiralty Pilots might be ‘cheek by jowl’ with the famous sailing yarns of Joshua Slocum and Erskine Childers.

Although I wrote Song of the Mokihana for the general reader, I always hoped it would find its way into the good company of the sailing world’s bookshelves, after the manner of Riddle of the Sands, perhaps. As luck would have it, when I came to read of Felix Von Luckner’s exploits, particularly his estimation of the only female prisoner aboard his three-masted commerce raider, Seeadler, I knew I had found a suitable tale to tell. Like The Riddle of the Sands, Song of the Mokihana is a premonition, but it is also the story of an escape from paradise. 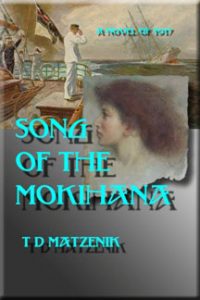 Ever since Melville, Stevenson, and Becke wrote their well loved romances, the islands of the South Seas have been the desire and destination of seafarers and adventurers, but war changes many things, so how would the horrors of the 1914 – 18 conflict be visited upon the trade winds?

By 1917, Germany had abandoned its colonies in the Pacific theatre and its nationals were generally the subject of suspicion. It followed that the territorial carve-up by the remaining powers: Japan, the USA, and Britain, was an acrimonious affair fuelled by naval strategies and racist hysteria.

Prey of missionaries, planters, and sharp merchants alike, the indigenous peoples of the Pacific region had no say in the events of 1917, and their cosmopolitan society made any allegiances unclear. From among these people, I drew the Mokihana’s company and the story’s central characters. They inherited the legendary abilities of Oceania’s boatmen, but seafarers and islanders can be a conservative and superstitious lot. Matildhe Kolbe and Henry Ka’imiloa Keenan find themselves entangled in a world of contradiction.

The salt sea might be expected to wash it all away when the schooner Mokihana takes her departure for the Dangerous Archipelago, but then there are those who would see her course afoul in the bloody history of the South Pacific.

Within the book you will find illustrations contemporary to the period, and the layout is in keeping with books of the 1920s. Historical notes and a glossary are provided, while further descriptive and biographical notes are available at the website. http://www.tumblehomebooks.com/

The paperback edition is available directly from Createspace: https://www.createspace.com/4015851