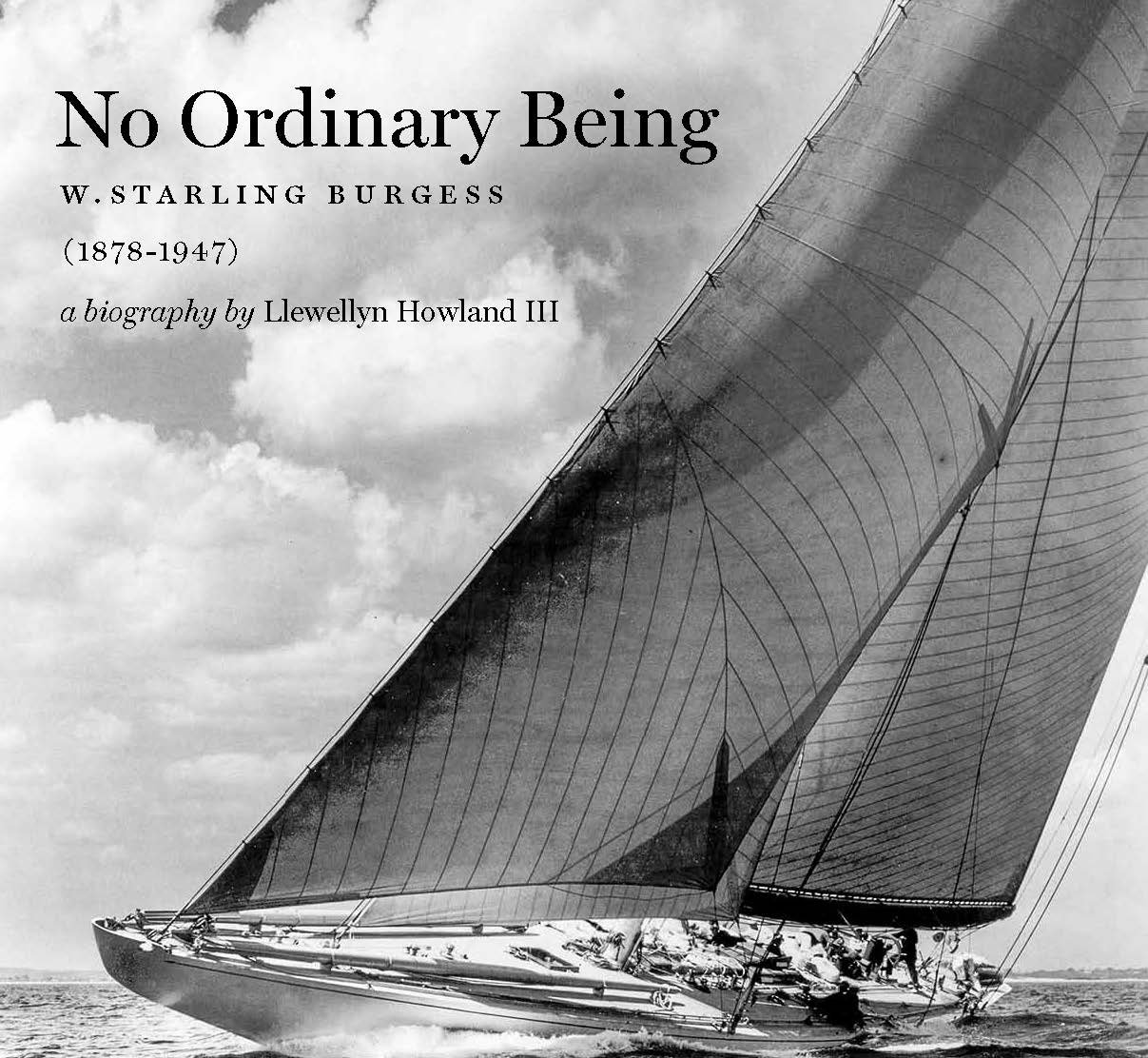 Over the past thirty or forty years Llewellyn Howland III, the genial proprietor of Howland & Co Books in Jamaica Plain, Massachusetts has written more than a few books and articles, mainly about maritime subjects. All have been meticulously researched, scholarly, written well in the simple but elegant style that one would expect of a former editor at the venerable Boston publisher Little Brown, and they are also literate and engaging as well as entertaining. You don’t have to be a world-class sailor or a naval history buff to enjoy Louie’s books as they are eminently readable, but it helps if you are interested in classic yachts and everything about them. When talking to Louie, or calling up to order a book from his ever seductive and informative catalogue, many friends and customers heard about his many years (decades really) of research into the life and work of W Starling Burgess. In the 1980s some of his findings were written up in a series of articles in Wooden Boat magazine. However, when asked about publication in book form, Louie was uncharacteristically vague. He would mention some new source, new interviews, newly discovered materials, and yet another good story. Several years ago, and with time ticking on, he was strong-armed by the folks at the New Bedford Whaling Museum into agreeing to proceed. With David Godine as publisher and in association with the Whaling Museum and Mystic Seaport Museum, which signed on, he was left with no further option for evasion. And thus No Ordinary Being (a reference to a quote by AJ Munnings of the Royal Academy in a letter to the Times of London about the designer of ENTERPRISE, ca 1930), W Starling Burgess (1878 – 1947) came into being.

The book, which has been printed in landscape ratio rather than portrait, is a hefty several pounds and runs to 455 pages; it is printed in soft grey tones on matte finished paper. Since there are numerous illustrations (prints, plans, images, sketches, and the like from throughout Burgess’s life) the horizontal shape, the gray tones and the matte paper suit the book and the material admirably. The book encompasses a deeply researched and carefully written narrative, an afterword, acknowledgments, list of yachts and other vessels designed by Burgess, aircraft designed by Burgess, notes on sources, bibliography and index. Louie once told me that there are over 200 illustrations, and I am sure there are.

Now for some observations: W Starling Burgess was the son of the noted designer Edward Burgess whose designs for Gloucester fishing schooners and other vessels accomplished during a short life led to a series of handsome, fast, able and sea-kindly boats. During his somewhat longer life Starling was involved in several design offices (friendships with the Stephens Brothers – Rod and Olin, L Francis Herreshoff) and he was involved with numerous women, being married five times. During his life he endured tragedy (the suicide of his first wife and the tragic drowning of his elder son) and enjoyed triumph. His designs range from fishing schooners (COLUMBIA, PURITAN) to J-Class yachts (ENTERPRISE, RANGER) to Metre class boats (VARUA), the brigantine designed for William Albert Robinson to sail to the South Seas, the cutter BARNSWALLOW (a boat I’ve always admired and that someone needs to restore), many different power and cruising as well as racing boats, and of course, one of the greatest of all schooners NINA (lost with all hands in the Tasman Sea in 2013). In association with others he designed (and flew) early planes, was involved with Buckminster Fuller and the Dymaxion car and many other projects such as WWII anti-submarine work for the US Navy and Air Force.

Many of Burgess’s designs plans are at Mystic Seaport Museum where they are accessible for the yachtsman to review. It is curious that with the growing fondness for classic yachts no one has engaged a boatyard to build one of his designs. Imagine a 6, 8, 10 or 12-Metre, or a P, Q, or R boat, or even a steam tug as designed by Mr Burgess! About the planes, the cars, and other inventions I cannot comment as they are beyond my ken but the idea of a Dymaxion car rather tickles my fancy and obviously it ticked Lord Norman Foster’s fancy too because in 2010, the British architect had one built.

The book will assuredly be the most authoritative biography of Starling Burgess for years to come, perhaps for all time. In his elegant narrative and gracious manner Louie Howland has written a narrative that does justice in full measure to the complex and complicated creative and personal life of a truly original American thinker, inventor, yacht and aircraft designer – an American genius and NO ORDINARY BEING – in what is no ordinary book!