Even today, no other yacht has quite the kudos of the schooner America from 1851. Rather than think that this is due to the expert machinations of the marketers of today’s America’s Cup match-ups dragging her into our collective consciousness, it would be nice to believe that it is somehow attributable to a vestigial ripple from the seismic stir she caused when passing The Royal Yacht Squadron in the lead on 22 August that year. Whatever the feelings regarding the pig-ugly carbon encrusted computer consoles that race in her name today, the original schooner America was a very cute yacht. And without wanting to sound like a Luddite, good-looking and fast were attributes that in yachting went hand in hand, almost without exception until the demise of the 12 Metre rule in 1987. 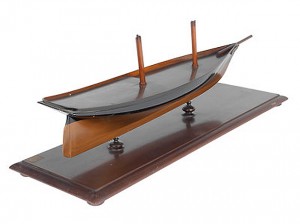 America was conceptualised to do just what she achieved: to show off the mechanical and technological skills of American boatbuilders on this side of the Atlantic and to do it against the backdrop of the Great Exhibition here that year, which was intended to do exactly the same for all British industry. To achieve this with the greatest impact – not to mention greatest financial gain for her owners – the aim was to engage America in beating all competitors that would entertain her challenges, cleaning up the prize-money and securing many lucrative side bets into the bargain.

With this aim, she was produced with money raised from a syndicate of New York Yacht Club members, headed by Commodore John Cox Stevens at the William H Brown yard, NY to designs by highly regarded brothers, James and George Steers. That she would achieve her goal was, it seems, by no means certain. Apparently the syndicate had options to defer payment of the $20,000 building costs until she had proved she was a winner; and upon her departure for European shores, the editor of the New York Tribune stated, somewhat negatively, “The eyes of the world are on you; you will be beaten and the country will be abused, as it has in connection with the Exhibition… If you do go and are beaten you had better not return to your country.”

But the Steers brothers knew their craft, they had become renowned for producing extremely fast and handy schooner-rigged boats with hollow clipper bows and the widest beam amidships, much against the common fashion in Britain. With these characteristics, their vessels had built great reputations among the highly competitive pilots in the New York area and this knowledge had not been wasted on the NYYC members, nor the local privateers and slavers. It seems obvious that with their goal in mind, her owners would have tasked the designers with adorning the yacht with every trick at their disposal and they certainly produced a striking yacht that had pace to back up the appearance. The form would have derived from function, but nevertheless, like the stealth bomber of her time, the look just added to the reputation – a yacht with those masts simply had to be fast. As Lord Paget, owner of Mona said at the time: “If she’s right we all must be wrong.” With the Illustrated London News chipping in: “As a model, she is artistic, although rather a violation of the old established ideas of naval architecture.”

And though, despite being genuinely fast, perhaps it was her looks that became her failing for she apparently raced just three times in British waters in the hands of her original owners, despite them posting repeated and increasingly lucrative challenges at the Squadron. In fact the lack of action became such a talking point that The Times newspaper officially published its disgust that none of the cream of British yachting could find the backbone to accept the chance to race for as much as £10,000. During her time in the Solent, America engaged in one impromptu race with the British yacht Lavrock on July 31st and then didn’t compete until the race for the 100 Sovereign Cup (not guineas as sometimes is stated) on 22nd August. She won both races as well as a later match up against steam engine pioneer, Robert Stevenson’s Titania. So was she genuinely fast or did she just look the part? The answer ought to be found in the result of the 100 Sovereign Cup race, where she won handsomely, but the battle around the Isle of Wight was not without it’s controversies.

Some say that she crossed the line late after fouling her anchor and she certainly had to replace a broken jib boom on the way round, but still she won by 18 minutes on the water after a trip of 53 miles – give or take – in 10 hours and 37 minutes. However, the event that muddies the water is that she actually gained the lead while sailing a shorter course than some other competitors – it appears that the race card and race instructions differed as to the exact course at the Nab lightship. The protest lodged against America for this, though, was overruled and the result became legend. The full story of the race and the cup is here.

Whatever the technological advantage of those wonderfully raked masts, that sleekly angled stern and the hollow, arrow-point bow, she certainly looked, and still looks, fast, and these things have a habit of haunting the opposition. As Warren Jones said about the US winning streak finally being broken on 26 September 1983 by the 12 Metre Australia II: “What we knew was that the winged keel gave us only a small advantage in certain, limited conditions. But what it did do for us was that it got into their heads, and then they simply sailed badly.” Perhaps there is more similarity between Australia II and America than just good looks.