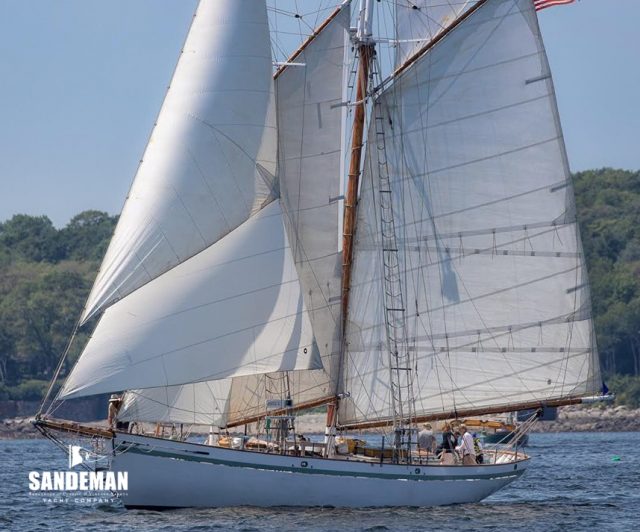 The magnificent John G Alden schooner DIRIGO II has been no stranger to major voyages over the years. The most recent epic began in March 2019 in the San Juans, Washington State, and continues now in the land of her birth, Maine, having transited Panama Canal.

[Penned on behalf of the extended Lohrey Family including their trusty sea cats, Saoirse and Roisin, by Captain Arthur Lohrey, present Owner/Steward of the DIRIGO II.]

Following the five month restore/refit of the 1939, 60ft Alden Schooner DIRIGO II by the Lohrey family and a capable Ensenada boatyard, the very next day after the subsequent challenging sail up the West Coast to her berth in the San Juan Islands, Washington, DIRIGO II had a visitor walk down the dock. Recognizing her rig from the ferry deck, he turned out to be the son of James W. Crawford, who had set out on a round the World voyage on DIRIGO II back in the 1960’s, met his soon to be wife in Tahiti, and continued the voyage as a family.

Fast forward nine years to 2019, opposite side of the continent, and another son sees DIRIGO II. He hops on a launch out to our mooring during the Camden Cup Regatta, Maine, to welcome us home, and informs us amongst many interesting tit bits that his sister was actually born onboard!

Comparing stories and beautiful coincidences I told him that I had indeed met my beautiful Irish wife whilst in Mexico, similar situation with his father, after deciding to continue the leg of the voyage from the Pacific Northwest to warmer climates.

Needles in the haystacks! People come; people go: owners, family, guests and crew. The heavens pass over the rig and the seas pass under the keel.

Boats are like magic carpets, but good boats, built properly, designed with knowledge and experience and taken care of, give the longest rides and without a doubt, exceptional, never to be forgotten life experiences. DIRIGO II is definitely one of them, designed specifically for ocean travel, she does it well and keeps her crew safe.

DIRIGO II under my stewardship sailed out the Straits of Juan de Fuca in October of 2017 and pointed her bow south. Laura and I met, the second day after anchoring off the beach in Cabo San Lucas. We decided to “come alongside” and continued to explore the Sea of Cortez together.

We discovered what they meant when they said it would be “hot” in the summer! Too hot for us and the boat as it turned out, so it was either sail back up the west coast of the USA again or set a new course.

We decided together as a family that it was time to take the DIRIGO II home and find a land-based home for us. She was built in East Boothbay Maine. We wished to experience the voyage, as our last turn to ride the magic carpet before turning her over (better than we found her) to the next proud, happy, and capable owner/steward. Our ultimate goal being to find a small cottage in Ireland to “drop our hook”.

We hauled her, painted, serviced, provisioned, fuelled her, and set sail from La Paz Mexico on March 6th of this year. Sons, daughters, grand kids, friends and crew came and went. We were voyaging. Our two black cat sisters, we call them the Irish Rebels, turned out to be great crewmates and night watch companions! Whilst a little rum soothed our ruffled feathers on days that were demanding, this pair would box it out high on the gaff of the mains’l.

Our course took us down the west coast of Mexico, Guatamala, Nicaragua, El Salvador, Costa Rica to Panama, through the locks of the Canal and north to Isla Providencia, Cayman, Florida, South Carolina, Rhode Island, Massachusetts and onto Maine.

Like any voyage or plan, ours was “multi-faceted”: brilliant days under sail; calm, starry nights; scary stormy green water over the bow; storms and torrential drenching squalls; bugs; repairs; warm ocean swims; beautiful deserted beaches; unheard of islands; whales under the bow; dolphins galore; sea birds hitching rides in the rig; crocodiles in the mangroves; boredom; excitement – and a bit of holy s***; good crew; funky crew; nips of tequila; the horror of the lukewarm beer and delight of the odd ice cold one; paperwork; foreign authorities; constant re-provisioning; jerry cans; laundry; fractured ribs; broken teeth and the emergency extraction; lovely, friendly, helpful people intertwined with the sullen and unhelpful; sunrises and sunsets to die for; necessary, delightful, peaceful nights ashore on a flat, real bed here and there.

All of this and more. So much more. And through it all, our voyage and others before, DIRIGO II is the thread. The Constant and the Stage; the Place; the Venue. Like an old house filled with memories of times gone by and those who have passed through not her halls in this case, but above and below her decks. The smell of brewing coffee, hot scones and the people all a part of the magic whilst aboard.

A taut sheet, a cozy berth, a safe anchorage, a solid ship, a successful voyage, dreamed of and taken. Wouldn’t change a thing, the whole is made of all the parts. Feels good to have brought her home and feels right to be here in this beautiful location, Maine, New England.

DIRIGO is Latin for ” the Leader ” or ” Lead the way”. Upon her launch in 1939, all those years ago, the Governor of Maine presented her with the state pennant of the same. We proudly flew that on our voyage here and are still flying it. It couldn’t have been presented to a more worthy vessel. Not only has she returned home but she brought us all here “leading the way” safely.

It feels good to look forward to the next leg, our next adventure but on land this time. We very much hope the next owner/steward and family appreciate and enjoy her as much as we did, take good care of her and write their own chapter of this ongoing book.

DIRIGO II is worth it, she makes magic. The voyage continues for us all.

P.S. We are taking the cats with us, that is IF they want to jump ship with us because as you know felines do as they wish…time will tell…watch this space….

She then took part in the Camden to Brooklin Feeder Race and Eggemoggin Reach Regatta.