It was zero degrees – F, not C – at my house last night and the wind was blowing out of the NW, straight from the Canadian wilderness at a steady 30mph gusting to over 40. Staying under cover inside with a warming drink and a good book or two and a comfortable chair next to a warm fire wasn’t an option, it was a necessity.

The only other option – working on annual income tax prep – was a very distant and unpalatable second choice. Who would choose to tentatively calculate how much our Internal Revenue Service and the Massachusetts Department of Revenue are going expropriate for FY 2014, given the option of looking at lovely photos of classic boats? Two very attractive, and reasonably priced photo books of classic yachts have come my way recently, and last night I decided to give them a look-see. And, yes, I’ll have to admit that it did occur to me that the owners of some of the yachts portrayed may actually be paying less than I am annually because of all sorts of clever tax strategies. 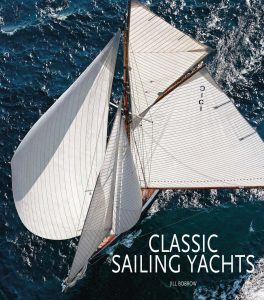 Jill Bobrow has been around all sorts of boats since at least the mid 70s and she is no stranger to classic yachts, having been, variously, editor of several high-end yachting magazines and the author of several books about luxury yachting. She’s also been cook and crew on charter boats, while finding time to author, along with photographer Dana Jinkins, several books including Yacht Interiors and another about Spirit of Tradition Yachts, both published in the 90s. Her latest book is titled Classic Sailing Yachts. The only publishing information I can find is that the revised edition was published by an Italian company, White Star. The book was printed in China and published in England in December of 2014 and USA in February 2015. Carefully produced and not expensively priced, this book would make a suitable gift for any owner of a small classic yacht, although, sized at just 9x19in, I wouldn’t expect it to be found on the coffee tables of mega yachts, but perhaps tucked away in a bunk-side drawer.

The book is a compilation of photographs (both historic and modern) of about 30 or 40 yachts, some (such as J-Class sloops) no longer with us, and some ‘modern classics’. There is a seven-page introduction, which gives a bit of history about (mainly) European and American sailboats of a certain size (mostly large), their design, construction and materials, and then a wrap-up section with photos from regattas such as the Nioulargue, Antigua Classic and the St Bart’s Bucket Regatta. These are inshore events that feature highly polished yachts with large crews, in posh resort areas. These yachts (and crews) are unlikely to participate in any of the classic races such as the Fastnet or the TransPac, or even the Bermuda Race. Nor are they likely to be at the festivals for traditional working water craft, such as Douarnenez or Brest. These are the crème-de-la-crème yachts – those that most of us can only look at from a distance – which sail from regatta to regatta over the course of a summer. The owners are the very wealthy – you need to be to purchase, rebuild/restore, crew, and maintain these vessels — and some are notoriously private. But at the regattas – or in books such as these – we, the common proletariat, have a chance to see them under sail and even take a look around below.

For that, my thanks go to Ms Bobrow and to other such authors, because the boats include some of the most lovely vessels ever built. Designed by the likes of William Fife III, Alfred Mylne, Charles Nicholson, Nathaniel Herreshoff, Starling Burgess and Olin Stephens, along with modern designs by Joel White and Bruce King, the range of designers (and builders) is, by necessity, limited to those who have the skills, experience, and facilities to work on such large vessels. But what gorgeous boats they are.

My niggle about this book is that it is devoted entirely to boats of a certain (large) size, and to only a few designers and builders. For each boat there is a page with certain specifics of design and build, and a short narrative. There are a lot of photos (mainly colour, but many older, monochrome) showing boats under sail and some details from deck shots or below. Except for a few of the new J-Class yachts there are no lines drawings or accommodation plans. This is a shame. I like looking at interiors and imagining day to day life on board, or even the delivery passages. I like looking at photos of heads, galleys and sail lockers, and also engine rooms. They show a lot of the guts of a boat and you get a feeling for whether the boat actually lives up to her reputation as, say, a crew killer (that galley – what, no fiddles on the counters? Who are they kidding? No boom gallows or lifelines? Yikes!) or is sea-kindly and comfortable off shore. Photos are shown with a brief caption but no information about the images, except brief details on the last page. There is a brief paragraph for attribution of the photos (and many are well known) but detailed information is sparse. Interestingly, there appears to be not one Beken of Cowes photo in the book. For this you will have to see the second book reviewed here, which is: Legendary Sailboats Beken of Cowes, also published by White Star of Italy, printed in China, and published in 2014. This book is printed in a horizontal orientation so that most of the photos show whole boats with, only occasionally, the middle part of the rig landing in the gutter. It measures about 17.5x11in and the monochrome prints show off the incredible selection of historic images from the famous Beken collection. These range from the late 19th century through the 1930’s – known as the golden age of yachting. The photo on the cover is of SUSANNE, taken by Frank Beken in 1911, although it is not identified (so far as I can discover) inside. Kenneth Beken (the current Beken, son of Keith and grandson of Frank) describes it as the best photo ever taken of a yacht, and it alone is well worth the price of the book!

This book, as with the previous book, is narrowly focused – the photos are all by various Bekens, all were taken in the Solent, and they were taken over a forty year period. Most of the yachts are large, and there are no interior photos, although there are some deck shots. All that aside, the photos are magnificent: Beken of Cowes perfected maritime photographic techniques and equipment, and Kenneth Beken describes their early cameras. He describes how his grandfather started off carrying glass plate negatives and how he told his son and grandson that he could only take about 60 plates in the launch that he used for photography. This taught him to use them carefully, and he always saved several in case anything interesting turned up on the way in. On one trip he had saved two plates, and it was: “good advice, as when he was heading home one day, a liner passed him on its maiden voyage. He had just two negatives left so he used them. The liner was the TITANIC!”

Any Beken of Cowes book is well worth buying but this one is particularly so as it really does include some incredible yachts. The size of the book makes it an impressive trophy on any coffee table, and I have to admit to a preference for the monochrome medium. Yes, I would love to see the interiors of these yachts (most no longer exist) and yes, I would love to have actually seen them under sail. This is the next best thing and I think that it is one of the best Beken books in a string of wonderful titles.